The Writing of Ronald Duncan 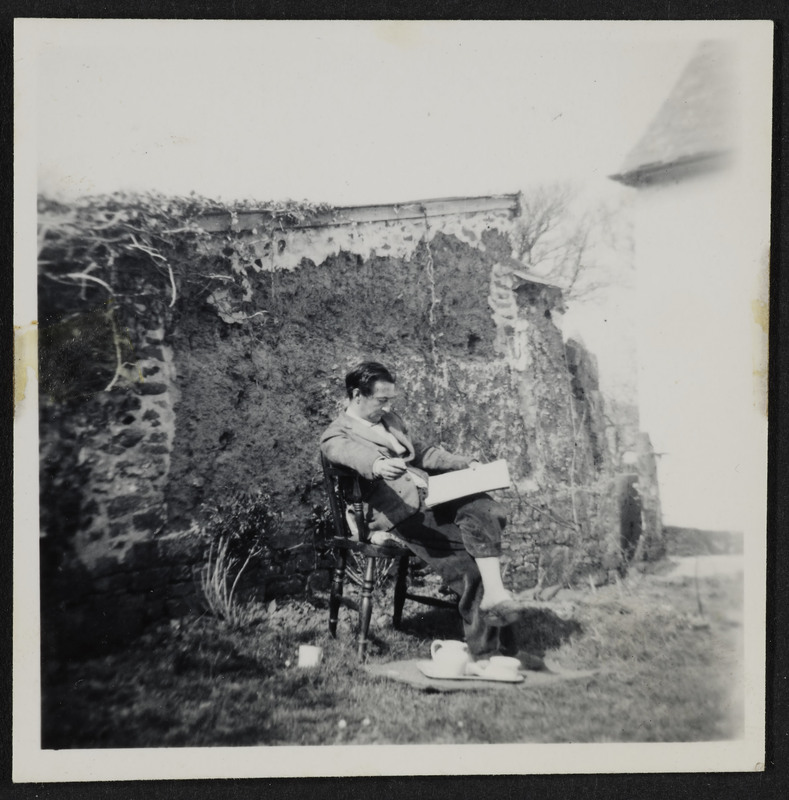 Ronald Duncan wrote from a young age, and his first book of plays was published when he was 26 (The Dull Ass’s Hoof, 1940). His writings range widely and include poetry, plays, short stories, autobiographies, books on farming, newspaper columns, film scripts, and political works.

Duncan’s first published book of poetry, Postcards to Pulcinella (Fortune Press, 1941), brought him to the attention of T. S. Eliot, who was a director of the publishing house Faber & Faber. Subsequently, much of Duncan’s poetic work was published by Faber & Faber, with The Solitudes (1960) being arguably the most significant of these publications. Early publications included the poetic pamphlet, Down Tools! (1936), and the Pacifist March (set to music by Benjamin Britten and later withdrawn by him, c. 1937).  Duncan also wrote two epic poems, The Mongrel (Faber 1950), and Man (Rebel Press, published in parts but with a complete publication in 1981). Man is perhaps the most important of Duncan’s poetic efforts, and represents an attempt to heal the breach between science and poetry; a similar attempt was made in the shorter The Birth of the Earth: A Poem for a Planetarium (1971), which was intended to be read as a counterpart to images of the solar system. Two synoptic collections of Duncan’s poetry were published during his lifetime, Selected Poems (1978), and Collected Poems (Heinemann/Quixote, 1981).

Duncan wrote a number of plays for the stage, and was actively engaged in the world of theatre. The verse-drama This Way to the Tomb was scored by Benjamin Britten and ran at the Mercury Theatre in London in 1945, helping to secure his reputation as a playwright. Subsequent published and performed dramas included The Eagle Has Two Heads (1946, an English-language adaptation of Cocteau’s L’Aigle à Deux Têtes), Stratton (1950), St Spiv (1950, later furnished with musical songs by Jerry and Jeff Wayne), Our Lady’s Tumbler (1951, for the Festival of Britain, with music by Arthur Oldham), Don Juan (1953), The Death of Satan (1954, later made into a television play by the CBC as The Return of Don Juan), Abelard and Heloise (1960), The Catalyst (1961, also known as Ménage à Trois, and the epicentre of a public censorship dispute), O-B-A-F-G (1964, an experimental play in one act for stereophonic sound), The Seven Deadly Virtues (1966), Schubert (1970, a dramatic monologue with music), and Lenin (1981). Beyond the stage, he wrote the film script for Girl on a Motorcycle (Jack Cardiff, 1964), though he later tried to withdraw his name from the project.

Some of Duncan’s poetic and dramatic works draw upon his personal relationships with his family, friends, and muses, particularly those with his wife, Rose Marie, and with the actress Virginia Maskell. Notable examples of this can be found in the play The Catalyst, and poems including the Solitudes. Duncan’s personal relationships with numerous well-known figures are addressed to some extent in his three entertaining, if controversial, autobiographies, All Men Are Islands (Rupert Hart Davies, 1964, addressing his life until 1943), How to Make Enemies (Rupert Hart Davies, 1968, addressing his life until the late 1950s), and Obsessed (Michael Joseph, 1977). A further memoire, Working with Britten (Rebel Press, 1981), was one of Duncan’s last publications within his lifetime and the source of some legal friction.

Other works included a number of journalistic, informative, and further autobiographical endeavours. Encouraged by Ezra Pound, he established The Townsman, a modernist arts magazine that ran from 1938 to 1945 (with later issues titled The Scythe). He published a book on Devon (Where I live, Museum Press, 1953), and wrote on country life and farming, with Journal of a Husbandman (Faber & Faber, 1944), a series in Punch (‘Diary of a Tramp’), and a regular column in the Evening Standard (‘Jan’s Journal’) amongst the more notable writings on these subjects.

The Ronald Duncan Collection constitutes a significant body of documentary evidence of Duncan’s oeuvre and writing practices, and extends from initial ideas sketched out in workbooks, and even on dinner-plates, to correspondence and business records, to personal copies of a number of his publications, and to evidence of the performance and reception history of his output in the form of programmes and reviews.

A substantial bibliography of Duncan’s writings, including some not represented in the Ronald Duncan Collection, can be found in the menu for this digital exhibition, labelled ‘Bibliography’.