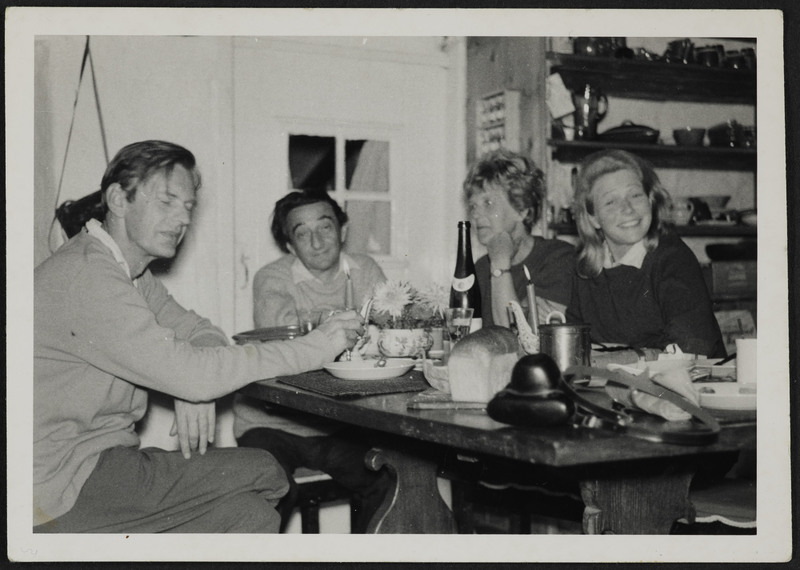 Composer Tom Eastwood with Ronald Duncan and his family at West Mill in the 1960s.

Music and interactions with musicians and composers are recurrent themes in Duncan’s works and the Ronald Duncan Collection. It is clear from his writings that music itself was of some importance to Duncan, and his passion for it found outlets in his work as a librettist, in his work as the literary editor of the Penguin Book of Accompanied Songs, in presenting at least one programme for Radio 3, and, not least, in his associations with a number of composers.

The most important of these associations was perhaps Duncan’s well-documented friendship with Benjamin Britten, which resulted in published works including The Rape of Lucretia, This Way to the Tomb, and the Pacifist March (which was later withdrawn). Through Britten, Duncan was introduced to Arthur Oldham, who wrote the music for Our Lady’s Tumbler. Duncan collaborated and was friends with Tom Eastwood, writing libretti for his television opera The Rebel and for the opera Christopher Sly. Stanley Glasser wrote an opera The Gift with Ronald Duncan as librettist, as well as setting Duncan's poem, Hylas. Jerry and Jeff Wayne wrote a musical based on one of Duncan's novels, St Spiv, and recorded a demonstration tape of a number of songs from the musical which is now part of the collection. Tantalisingly, Duncan was also acquainted with Igor Stravinsky and wrote in his memoires of an unfulfilled plan to collaborate on a work together.

The Ronald Duncan Collection contains a substantial body of documentary evidence pertaining to Duncan’s relationships with music and musicians, including a number of his publications, event programmes, personal and business letters, manuscripts (or reproductions of manuscripts), draft libretti, informal and press photographs, and, in some cases, audio recordings of rehearsals or performances.