Mysteries and revelations about Sister Kitty 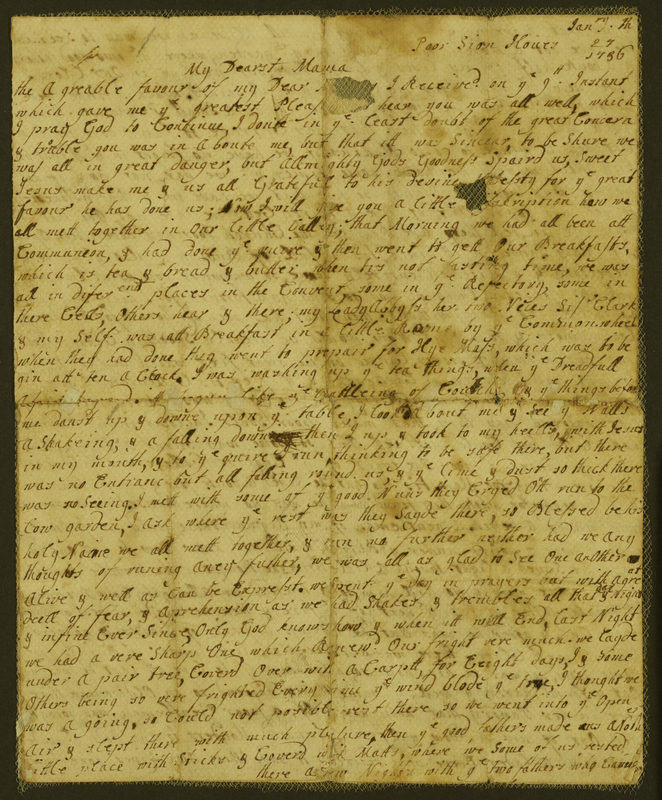 Another letter in the Syon Abbey archive, sent to the community more than 150 years after the Great Lisbon Earthquake, poses a further mystery. Correspondence dated 1911 from a relation of Sister Kitty makes reference to a painting of the nun that they would like to donate to the community. However, there is no other trace of this painting in the archive, and its whereabouts remain unknown.

Following the publication of an article about Sister Kitty's letter in 'The Times' newspaper in March 2018, Sister Kitty's five-times-great-nephew got in touch with the University of Exeter Special Collections and donated a copy of a letter by Sister Kitty in his possession. Dated 1763, eight years after the Great Lisbon Earthquake, it is once again addressed to ‘My Dear Mama‘. The contrast between the two letters is striking. The second letter finds Sister Kitty noticeably happier, without the uncertainty and fear that had gripped her while she was writing the first letter.

Two passages in the letter particularly stand out for what they reveal about Sister Kitty's life at Syon Abbey. In the first, she reflects upon her decision to become a nun, writing:

‘tis Certainly a most happy Life & for my part I like itt every Day better & better & rejoice for haveing made such a happy happy Choice’.

In the second, she reports on her role that week as hebdomadary (sister appointed for the week to sing the chapter mass and lead the recitation of the canonical hours). She writes:

‘my Duty this week is hebdommadarium which in there weeks Officiates the Devine Office in the quire[.] they rise the first & rings the Bells & give the Nuns Lights[.] this we have in Our turns from the Oldest to the youngest in the convent[.] I darsay was D[ea]r Mama to hear me Sing in the quire she would be much Delighted for they tell me I have a very sweet voice which I thank God for itt as its a good talent for a Nun’.

Despite knowing that the convent in Lisbon was rebuilt soon after its destruction by the earthquake, it is comforting to have this written confirmation that Sister Kitty found happiness and hope in life again after surviving the Great Lisbon Earthquake.