Syon Abbey was a monastic house of the Order of the Most Holy Saviour, also known as the Bridgettine Order. The house was founded at Twickenham in 1415, and the community followed the Rule of St Bridget of Sweden. This enclosed Bridgettine community - comprising both monks and nuns and governed by an abbess - was renowned for its dedication to reading, meditation and contemplation. In addition, it was unusual in being the only English Catholic community of religious to have continued existing without interruption through the Reformation period.

In the wake of Henry VIII's Dissolution of the Monasteries, the community dispersed into smaller groups in which they continued their religious practice, with some remaining in England whilst others sought refuge abroad. Syon Abbey was restored for a short period in England under the Catholic rule of Mary I; however, following the accession of Elizabeth I and the return to Protestantism, the community left England and went into exile. The community spent over half a century migrating through the Low Countries (Antwerp, Dendermonde, Haamstede, Mishagen, Mechelen) and France (Rouen), before eventually finding a new home in Lisbon, Portugal in 1594.

In Lisbon, the community survived a convent fire in 1651 and the Lisbon Earthquake in 1755, but both events presumably resulted in the loss of many of Syon's early records. The last brother of Syon Abbey died in 1695. In 1809, at the height of the Napoleonic Wars, the community - with the exception of three sisters, who remained in Lisbon - attempted a return to England; however, by 1815, they were struggling financially, and eventually they relinquished many of their ancient treasures to the Earl of Shrewsbury in exchange for financial support (many of these treasures were auctioned at the The Great Sale of 1857 at Alton Towers). One sister returned to the community in Lisbon, whilst the last of the nuns in England died in 1837. Following the arrival of new postulants in the early nineteenth century, the community in Lisbon recovered and regained its strength.

In 1861, amid rising religious tensions in Portugal, the community successfully returned to England, where they initially resided in Spetisbury, Dorset. Following a further relocation to Chudleigh, Devon, in 1887, the community finally settled in South Brent, Devon, in 1925. On account of dwindling numbers and the age of the remaining nuns, the decision was made to close Syon Abbey in 2011. In the same year, the archive was transferred to the University of Exeter, where it joined other previously deposited collections relating to Syon Abbey, including printed books and manuscripts from the Syon Abbey library. The community attracts considerable research interests throughout the world.

The Syon Abbey archive consists of a wide variety of material relating to the workings, business and people of Syon Abbey. It includes correspondence, documents, account books, diaries, notebooks, property deeds with seals, plans, photographs, and artwork. Records in the archive predominantly date from the nineteenth and twentieth century, and so represent a very full reflection of the workings of Syon Abbey from the community's return to England in 1861 to the closure of Syon Abbey in 2011. In addition, the archive contains a significant quantity of material dating from the sixteenth to the mid-nineteenth century, the period in which the community was living in exile in the Low Countries, France and Portugal. The archive also includes a small number of fifteenth-century records relating to property, as well as several records created or collected by members of the community since the closure of Syon Abbey.

The Syon Abbey Medieval and Modern Manuscript Collection comprises almost 200 manuscripts, which date from the early fifteenth century to the late twentieth century. They include liturgical, devotional and theological texts, as well as histories of Syon Abbey, personal accounts of the lives of sisters, and catalogues of the Syon Abbey library. Many of the manuscripts are inscribed with the names of the sisters and brothers who transcribed or read them, providing insight into scribing and readership at Syon Abbey.

The Syon Abbey Library Collection contains over 1,000 printed books from the library of the Bridgettine community of Syon Abbey, dating from the early sixteenth century to the late twentieth century. The collection contains many Catholic hagiographic, devotional, polemical, and historical works. As well as containing numerous individual titles of interest, the collection as a whole is a rich source of study for ecclesiastical history: for the history of libraries and reading habits, and for its significance to researchers interested in the history of women's learning and reading. 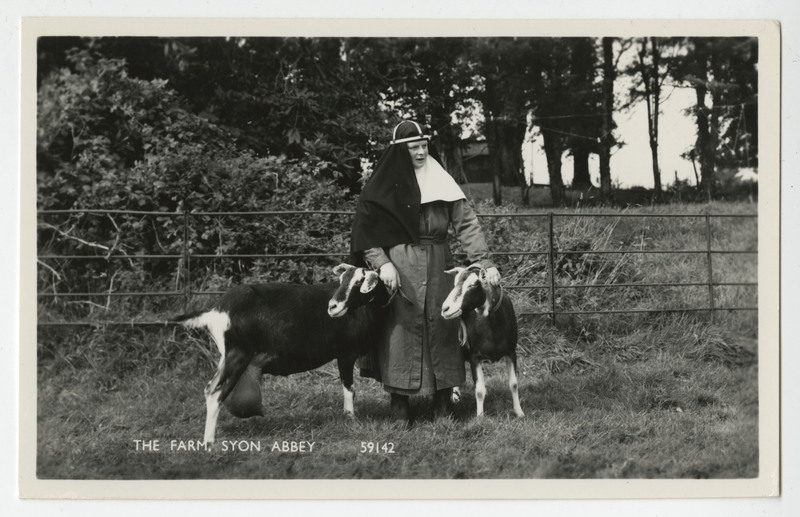